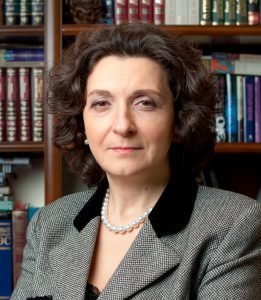 Prof. Tsisana Shamlikashvili – founder of the Scientific and Methodological Center for Mediation and Law, president of the National Organization of Mediators (NOM), chair of the Subcommittee on ADR and Mediation in the Russian Association of Lawyers, editor-in-chief of the magazine “Mediation and Law”

Tsisana Shamlikashvili is an International expert in ADR, practicing mediator, lawyer, neurologist (academic degrees of MD, PhD) and psychologist. Professor of the Moscow State University of Psychology and Education, holder of the chair “Mediation in social practices”. Her major research topic is the ways how society can influence the personality forming and development. Since the end of 1990-s Prof. Shamlikashvili devoted herself to the field of Alternative Dispute Resolution, mediation in particular, and its social importance.

Mrs. Shamlikashvili is CEDR-accredited mediator, mediator of JAMS International (USA-UK), regional mediator of the World Bank for Russia, Kazakhstan and countries of Central Asia, Member of Association for Integrated Mediation, Board member of EMNI, Council Member of Straus Institute for Dispute Resolution, Pepperdine University (USA), Assosiated Board Member of GEMME (Europe), Board Member of AAPMAD (Association of Academics for the Promotion of Mediation as Academic Discipline), Member of International Institute for COnflict Prevention and Resolution (CPR European Advisory Board).

Prof. Shamlikashvili is practicing mediator in a wide range of cases from complicated cross-border commercial disputes to family conflicts, as well as intellectual property, workplace, financial, personal injury and medical malpractice disputes. Prof. Shamlikashvili has developed her own method and educational program – “School mediation” for children, students and maladjusted youths (to be integrated in Juvenal and Restorative Justice systems), training programs for professional mediators approved by Ministries of Education and Justice of Russian Federation. Mrs. Shamlikashvili is the author of the University Master Program «Mediation in Social Practices», which is the first of its kind in Russia. Under Prof. Shamklikashvili’s leadership Center for Mediation and Law has developed Multilevel Complex Integrated Mediative Approach (MCIAM) for corporations and supports courts in different regions of Russia to establish Mediation Referral Programs etc.

Mrs. Shamlikashvili is the Chair of Subcommittee on ADR and mediation in the Russian Association of Lawyers.
Prof. Shamlikashvili is the author of numerous scientific articles and books on mediation, alternative dispute resolution, law, psychology and neurology. Among others are such books as “Mediation as a Method of Out-of-court Dispute Resolution” (2006), “Management of Difficult Decisions in the XXI Century: Secrets of Building Consensus, or How to Make Everybody Content” (2009), “Why Does a Child Find Difficulties in Schooling and How to Help Him” (2010), “Mediation as ADR Method. Focusing on Judges” (2010), “The ABC’s of Mediation” (2011), “Introduction to Dialogics” (2011) etc.