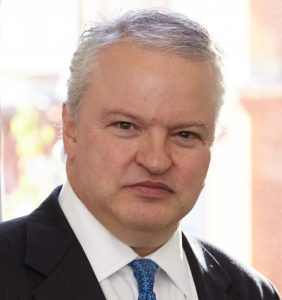 Formerly a corporate lawyer, Bill has mediated full-time since 1991 in a vast range of commercial, religious, ethnic and political disputes and conflicts involving governments, national and international businesses, professional firms, factions, pressure groups and individuals from over 50 countries.

He has been independently ranked every year as one of the Europe’s top commercial mediators, and was ranked “Global Mediator of the Year 2014-15” by Who’s Who Legal.

He has served as adviser on mediation/conflict resolution to many governments (eg Russia, Ukraine, Turkey, Romania, Bulgaria, Slovakia) and public institutions (eg UN, EU Commission, IFC/World Bank), and trains and mentors mediators from around the world. He has established and chaired international dialogues focussed on conflict resolution and mediation, and involving over 30 countries. He serves as Special Adviser on Reconciliation to the Archbishop of Canterbury, and last year received the Archbishop’s inaugural award for outstanding services to reconciliation. He is on the Advisory Board of the All Party Parliamentary Group on Conflict Issues in the UK Parliament, and is a Distinguished Fellow of the International Academy of Mediators.

Details can be found at www.billmarsh.co.uk